Toyota RAV4 gets an upgrade

The fifth-generation Toyota RAV4, on the market for barely a year, is going more places than it has ever gone before. The arrival of the first-ever RAV4 TRD Off-Road model was announced earlier this year, and today, at the Los Angeles Auto Show, Toyota debuts a new premium, fun-to-drive RAV4 performance model with an estimated 225kW, advanced all-wheel drive, sport-tuned suspension and exclusive design features. 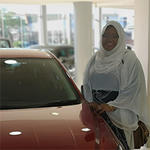