The Beat The Price New Car Demand Index for July 2019 shows a particularly strong month for MOTUS, with six models in the top ten most requested cars. Demand for compact crossovers and SUVs continues to grow. These models now account for a quarter of our Top 20 list.

The twenty most requested models* in July 2019 were:

Beat the Price offers a unique insight into the preferences of South African car buyers because it captures their initial preferences, rather than the vehicle they eventually settle for. If we compare the list above to the NAAMSA figures, we see some marked differences.

This month’s report is a striking testament to the increasing power of wholely imported brands like Hyundai, Kia and Renault. In fact, if we strip out the two Polo variants (which account for nearly a third of all sales), all of the other locally-represented manufacturers only account for 34% of the entire Top 20 in total, while the three MOTUS brands account for nearly 36%.

While Nissan is consistently in our Top 10 most requested manufacturers, its individual models have only made our Top 20 twice this year, with the NP200 appearing in position 20 in March and again in July. Significantly the Qashqai, which competes in the growing compact crossover market, has struggled to even get into our Top 30.

This is particularly significant when compared to the likes of Mazda and Kia which have fairly similar total market shares to Nissan, but frequently have their compact crossovers in our Top 20 (the CX3 and Sportage respectively). This suggests that Mazda and Kia are punching well above their weight in marketing this segment - with their models outperforming even the likes of Ford and Hyundai which have more than twice their market share.

The surge in interest in Ford models continued in July. After a slow start to the year, Ford has finally broken into the top half of our table with the Ford Figo taking 8th position. Ford’s compact crossover - the EcoSport - also made its first appearance of the year, and interest in the Ranger has held steady after a big uptick in June.

Given the overall size of the Ford brand, it was unusual for it to only have one or two entries in our list for the first half of 2019. However, thanks in part to the arrival of several new models and some intense marketing, Ford now has four entries comfortably in our Top 20.

Although the NAAMSA sales figures are an invaluable resource for tracking the market, they are less useful for forecasting and tracking consumer demand for brands and models. This is because:

As a free online service, you might expect that Beat The Price is flooded with requests for high-end luxury vehicles. Fortunately, this is not the case. Our customers tend to be serious, practical and focussed on good value for money. In other words, ordinary working South Africans, many of them from the emerging middle class. 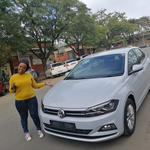 Miss Yena from the Eastern Cape: driving away in her new VW Polo, dealer-delivered with the cheapest price all the way from Newcastle.