Ford is raising the bar further in the ultra-competitive light commercial vehicle (LCV) segment with the launch of the New Ranger for 2019. Featuring an extensive range of mechanical, technological, feature and comfort upgrades, the new line-up will make the Ranger an even more compelling choice amongst workhorse and leisure-oriented pick-up customers.

"The current Ranger has been a fantastic success story for Ford in South Africa where it remains one of the country's top-selling vehicles, and the leading LCV export to markets in Europe, the Middle East and Africa," says Doreen Mashinini, General Manager Marketing at Ford Motor Company of Southern Africa.

"The New Ranger introduces fresh exterior and interior design cues that build on its 'tough truck' image, complemented by the adoption of new technologies that further bolster the Ranger's established reputation for safety, convenience and comfort.
"With an extensive range of under-the-skin changes, including the introduction of the all-new 2.0-litre Bi-Turbo and Single Turbo diesel engines, a revolutionary new 10-speed automatic transmission and a revised suspension set-up, this is by far the biggest upgrade yet for the current-generation Ranger, which continues to be proudly produced at Ford's Silverton Assembly Plant in Pretoria," Mashinini adds.

Tough, modern design
Continuing the Ranger's proven 'Built Ford Tough' heritage, the assertive styling of the 2019 model delivers an even more powerful presence on the road. The latest model offers the opportunity to provide greater differentiation in the series. Accordingly, the front-end design of the popular XLT series has been updated to have a more horizontal feel, with the centre grille bar now divided into two, giving it a more precise and well-crafted look.

The lower bumper also presents a sense of solidity and strength through the centre beam that runs into the outer fog lamp areas. With a wider lower grille, the new bumper complements and harmonises well with the new front end. The same design execution has been applied to XL and XLS variants. 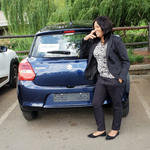 Thank you Beat the Price, just when I was about to give up and get a second-hand, you came through.