A new African car brand debuted at Automechanika Johannesburg last week. Mureza initially was a joint venture with the SAIPA Group in Iran for platform-sharing and the supply of some major components, but Mureza's ultimate objective is to design and manufacture vehicles in Africa for African drivers.

The first model, the Prim8 (pronounced Primate), is a crossover/hatchback which will be assembled initially from SKD kits in the Automotive Supplier Park in Rosslyn, South Africa, and later at the Willowvale assembly plant in Zimbabwe and in the ex-Hyundai plant in Botswana. The new business is being backed by funders in the United Arab Emirates.

The prototype Prim8 will be displayed on stand 6K4G in Hall 6 at Nasrec Expo Centre. It has been converted from left-hand to right-hand drive locally, but the future SKD and CKD kits will be set up for right-hand drive. A three-year warranty will cover the car.

The Prim8 uses a 1.5-litre petrol engine developing 87kW and drives the front wheels through either a five-speed manual or CVT transmission. The target is to offer the fully equipped top model at between R180 000 and R200 000. 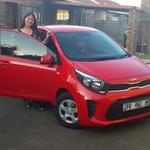 My boss gave it that name.
Thanx, I love my car! This car to me was a blessing from God.
Thank you all for your help. Maggie, Witbank