The Beat The Price New Car Demand Index for December 2019 reflects the nervousness in the local car market as load shedding knocks business confidence and recession looms. Although December 2019 was an excellent month for Beat The Price, with the highest number of requests for a single month in our history, our top 20 was dominated by more affordable models.

The twenty most requested models* in December 2019 were:

New car buyers have an eye on the economy

One of the strengths of the New Car Demand Index is that it captures the purchasing intentions (and ambitions) of a wide range of South Africans. We receive requests from everyone from emerging middle class consumers in cities to older retirees living on golf estates along the coast. As such the Index is usually a mix of “sensible” and “fun” - with both entry-level workhorses and luxury models making an appearance.

The December 2019 edition of the Index has swung decidedly in favour of “sensible”. Three quarters of this month’s list are affordable, reliable compact models like the Hyundai i20, the Ford Figo and the new Toyota Corolla Quest.

Even the “fun” models tend towards affordability. The entry-level Renault Kwid costs less than R150 000 and the Haval H2 starts at R260 000. In fact the only car in this month’s Top 20 priced above R400 000 is the Toyota Hilux - not exactly a luxury vehicle!

The average price of our Top 20 is now under R250 000 - the lowest it has ever been. Given that our requests have continued growing, we conclude that consumers are still buying new cars - they are just choosing more affordable models. Whether this trend continues depends very much on how the economy fares in 2020.

An interesting trend over the last three months is the rapid rise and then fall of requests for the new VW T-Cross. The new compact SUV was the 10th most requested car in October but fell to 17th in November and is now in the 20th spot.

This suggests that VW’s initial burst of marketing was extremely successful. Launching a completely new model that catches people’s attention is not easy in the crowded markets of the 21st century.

However, the rapid decline in interest is definitely related to the severe stock shortages for the T-Cross, which is likely to be in short supply right through to February. Getting people excited about a new model is vital - but being able to meet that demand is just as important.

As a free online service, you might expect that Beat The Price is flooded with requests for high-end luxury vehicles. Fortunately, this is not the case. Our customers tend to be serious, practical and focused on good value for money. In other words, ordinary working South Africans, many of them from the emerging middle class. 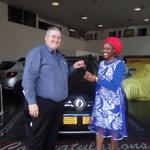 Congratulations to Miss Bereta M, who bought her Renault Duster 1.6 Dynamique through Beat The Price.
We wish you many happy miles!